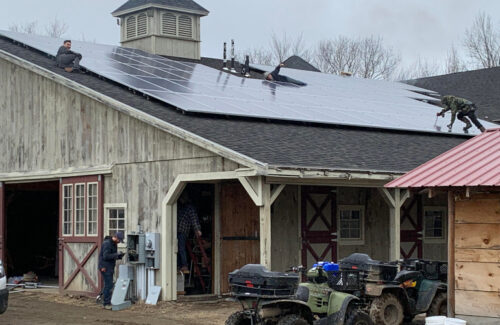 Nibezun, a Native-led nonprofit that seeks to revitalize and preserve Wabanaki culture, welcomed a new solar array and heat pump system to deliver sustainable electricity and heat to its facilities.

“We hope to ensure increased sustainability for now and for generations to come, and solar energy is the obvious next step on our path,” said Nicole Paul, co-director at Nibezun. Partnering with Everybody Solar, nearly $60,000 was raised from foundations and individual donors, to install the solar array and heat pump system, which will offset almost all of the nonprofit’s current electricity usage and allow Nibezun to spend more of its resources on cultural preservation programming.

Each year, Nibezun spends approximately $4,600 on electricity across its multiple buildings. The 20.48-kW solar energy array installed by Sundog Solar will generate 23,806 kWh of electricity, offsetting nearly 100% of current usage. These savings will allow Nibezun to reallocate funding to various programs, including:

“Everybody Solar’s mission is to bring solar to everybody,” said Myriam Scally, director of operations & development at Everybody Solar Director. “Over the years, we have found that some of our most valued projects have been in support of Native American communities across the United States. We are honored to have been able to help Nibezun go solar and thus restore the balance of their operations.”

Nibezun works to bring a sense of stewardship, sustainability and community to local residents. Since being founded in 2016, has sought sustainable growth, supporting its mission of preserving and sharing Wabanaki culture through education and practice on dedicated lands along the Penobscot River.

News item from Everybody Solar