A new hub for Wabanaki women aims to share culture, teach, and support one another 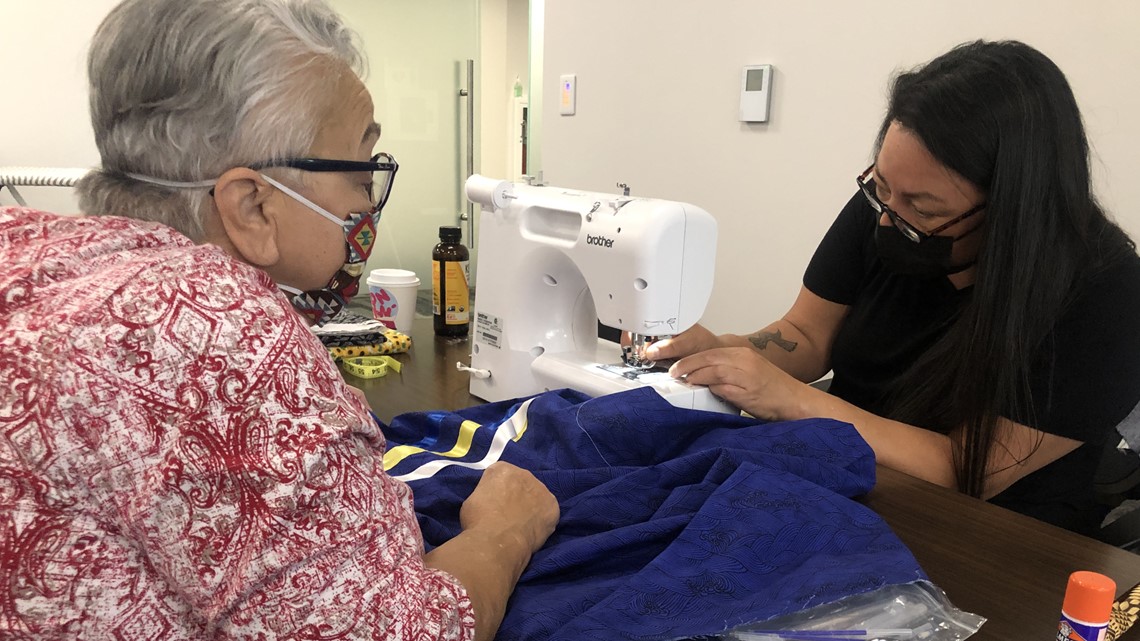 As we celebrate Native American Heritage Month, a new partnership between the Maine Women’s Fund and Wabanaki Public Health and Wellness is enabling Indigenous women to have a place to share their stories and try to make a brighter future for their communities.

The goal of the new effort of Wabanaki women’s talking circle is to identify and serve the needs and interests of Indigenous women all throughout Maine. It’s a safe cultural place, where they can share their needs, concerns, knowledge, and skills.

Some of the issues they have been discussing include:

During a women’s talking circle in Bangor on Tuesday morning, Indigenous women were making regalia, clothes they use for ceremonies.

“It’s a way to honor your womanhood, and honor the earth, and honor who we are as women,” said one of the women at the circle.

The women’s talking circle is made possible thanks to a $100,000 grant from the Maine Women’s Fund.

“Maine Women’s Fund partners with organizations statewide but we really saw an opportunity to partner with the Wabanaki communities to make sure that their voices were really raised,” said Kimberly Crichton, executive director at the Maine Women’s Fund.

“This is the only funding here in Maine that from this network that is going to an indigenous effort,” said Lisa Sockabasin, director of Programs & External Affairs at Wabanaki Public Health & Wellness and a citizen of the Passamaquoddy Tribe at Motahkomikuk.

One of the main goals of the overall effort is to find solutions to some of the economic barriers these women say are holding them back.

According to Wabanaki Public Health and Wellness, their communities experience unemployment rates 4 to 5 times higher than those who are not Native American.

“This is the only funding here in Maine that’s from this network that is going to an Indigenous effort,” Sockabasin said. “So this entire effort is about hearing those voices, hearing those voices of people that are often not reflected in those data sets, which is problematic for so many reasons.

The hub is a way to help Indigenous women to feel the power of their collective knowledge, “As well as make sure that we no longer remain invisible,” she said.

Sockabasin said state data do not reflect Indigenous people, so the women’s talking circle is also starting to collect their own data.

Like any other community, Sockabasin said some Indigenous people are also facing issues like substance use disorders, lack of childcare, food insecurity, to name a few.

The circle will continue to help Indigenous women raise those concerns and help find solutions.

Genevieve Doughty pushed for the creation of the hub. She said the main reason this Wabanaki women’s talking circle was created was to share stories and “be able to share what’s on our mind and what’s on our hearts, and maybe something that needs to be said that you would say it anywhere else.”

“To feel the power of our collective knowledge as well as making sure that we no longer remain invisible,” added Sockabasin.

Through the women’s talking circles, Wabanaki women have been identifying needs that will form the basis of new programs.

“To teach our children, teach, our nieces, our nephews, those who we take care of, there is lots of responsibility in that knowledge that we hold,” said Esther Sappier, another woman who participates in the circles.

The group of Indigenous women meets at least once a month.