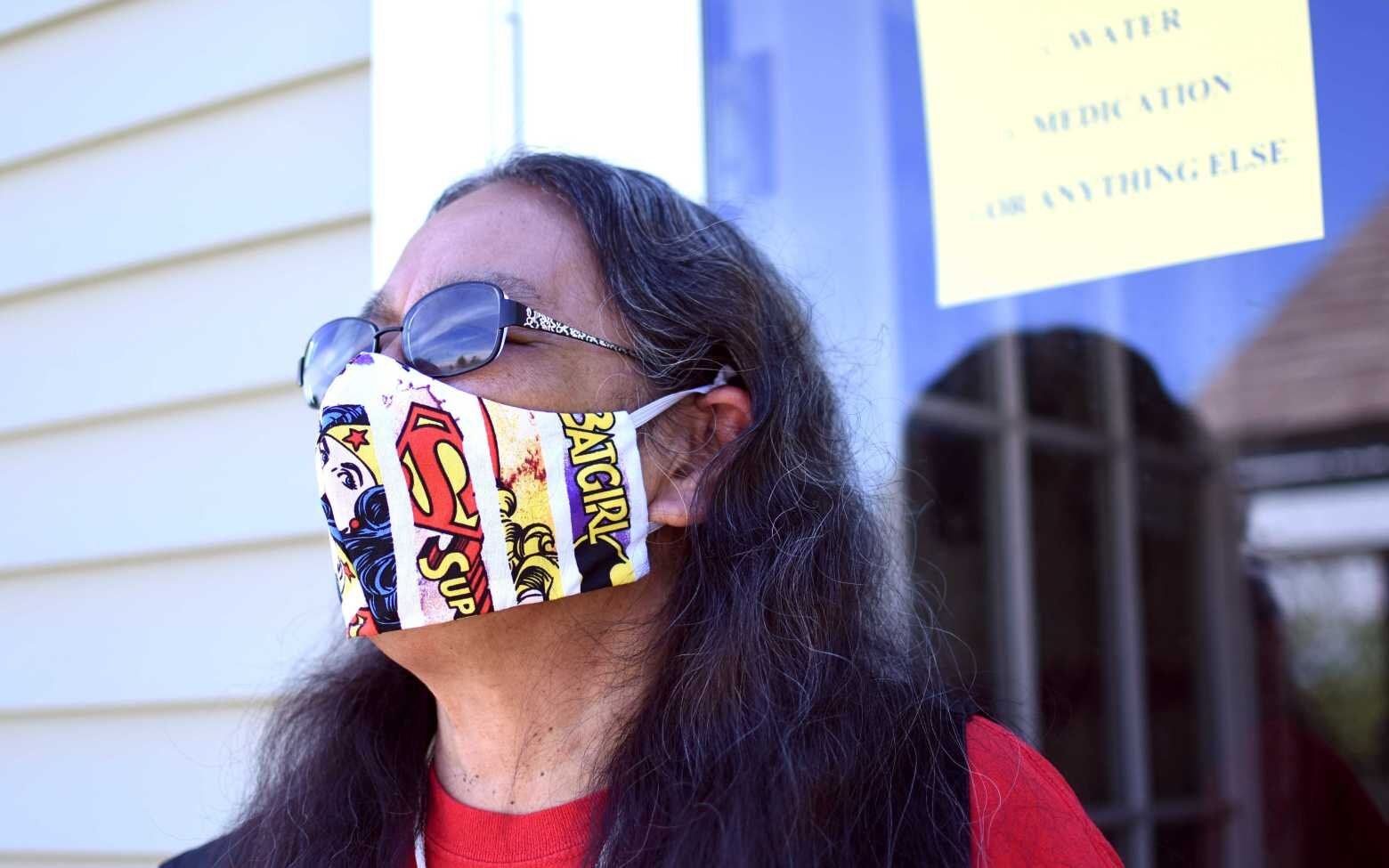 Since the coronavirus pandemic began, Passamaquoddy Tribe elder Sarah Stanley’s world has shrunk to her home and a house across the street where three of her grandchildren live on the Pleasant Point reservation.

It’s about as far as she feels safe going. Stanley, 60, has chronic obstructive pulmonary disease, putting her in the high-risk category for the virus. Despite family being close, Stanley said she feels isolated most of the time and does not feel safe going out even with a mask and gloves.

If she needs something, Stanley posts a colored sheet of paper in her doorway: yellow for supplies, red for illness, or blue if she needs someone to talk with. At 9 a.m. and 7 p.m. every day, workers will drive by her home to check if a color is posted and they get what she needs.

They recently dropped off a supply kit containing toilet paper, cleaning items and soap. For a few minutes, Stanley chatted with the workers. She has known some since they were children. The supplies and the moments of connection are a lifeline for Stanley.

It is one of the ways Wabanaki Public Health, a health agency serving Maine’s federally recognized tribes, has worked to keep the virus out of those communities. Its approach seems to have worked. While other tribes have been hit hard across the country, only three recorded cases of the virus are attributed to American Indian or Alaskan Native individuals in Maine, according to state data.

The response to the virus has included getting wireless internet and cellphones into tribal food pantries so people can call ahead before arriving, buying freezers for members to store food, or the elder colored paper project with the Passamaquoddy Tribe, said Lisa Sockabasin, director of program and external affairs for Wabanaki Public Health.

Individual tribes in Maine have shifted their operations to work remotely and implemented a combination of meal deliveries and food pantries for vulnerable members. The Passamaquoddy Tribe and Penobscot Nation reservations have been closed to outside visitors.

Statistically, Native Americans suffer more from chronic heart and lung issues that make them more vulnerable to the virus. On the Navajo Nation reservation in the southwest, a lack of critical infrastructure like clean water and the internet has contributed to some of the highest rates of infection in tribal communities.

Sockabasin, who directed Maine’s minority health office from 2005 to 2016, said it is possible the number of afflicted tribal members in Maine has been undercounted. She estimated about half of tribal members live off the reservation, making connecting with them difficult. She also said tribal members may be fearful of being discriminated against by the state and the health care system.

“Communities are skeptical,” Sockabasin said. “People don’t understand why it’s important to track that information. The state needs to build relationships in those communities so people can understand why that data collection is important.”

Maine Center for Disease Control and Prevention spokesperson Robert Long said the state has been having weekly conference calls with tribal health leaders to update them on the virus and the tribes’ specific needs. Maine CDC Director Nirav Shah has repeatedly said he is working to connect with minorities in the state to account for disparities.

Sockabasin said it is critical to build a responsive system while cases are low. That has meant sourcing cleaning supplies from across the state, or shipping pallets of water to communities like the Pleasant Point reservation, where the water is not safe to drink.

The Penobscot Nation has its own Abbott Laboratories machine to conduct rapid testing for the virus and the Aroostook Band of Micmacs and Houlton Band of Maliseet share a machine, tribal health liaison Kristi Ricker said. The Passamaquoddy reservations also share a device.

In particular, there is a focus on protecting elders, who pass down the tribes’ language and culture. Leslie Nicholas, the brother of the Passamaquoddy chief at Indian Township and the elder health services coordinator there, often picks up medication for elders and delivers lunches to prevent them from going out.

“You talk about an elder and their value, but every tribal member is valuable to our existence,” Nicholas said. “Our culture, our crafts, those are values we take high precautions to preserve.”